The Rise of Memeification in Financial Technology

Open Banking was legalised on the 13th January 2018. Recently we have seen a prolific rise in challenger banks and Personal finance management applications (PFMA). Open Banking is a recent legal development in the UK, meaning banks now have to supply a customer’s financial data to third party applications if consent is given by the said customer. These third parties take this financial data and with their API, restructure this information in a way that makes it more useful for you. These third parties, present your data with the hope that it will help you (the customer) do as you best please with your money whether that is spending it in the right way for you or putting it aside for something important.

It seems an appropriate time to write an article on Challenger banks and PFMA’s, as these companies are currently in the midst of a marketing war with London’s TFL ad space being their battleground. As a marketer there is something particularly interesting by the way in which these companies have approached their adverts in 2019. Each advert for the respective challenger bank has shared one common denominator, memeification. I have to make it clear, this word is not in the english dictionary but the chances are it soon shall be. For those who don’t know, memeification is the process by which internet memes are used to create something. The structure of internet memes and the common slang used by memes have become increasingly apparent in the adverts released by “challenger banks”and PFMA’s. This January I saw three adverts on the tube using memeification, two of these ads were for challenger banks and one was for a money management application.

Viola Black , “the everyday account for everyday people”, seemed to come out of thin air when it launched it’s campaign two months ago. Prior to it’s huge ad campaign, Viola Black hadn’t caused much of a fuss in the personal finance world. However, backed by the ‘Viola Group’, Viola Black was able to paint much of London with it’s bold “Move over, Monzo.” slogan. Rarely does one publish an advert that so clearly challenges a competitor. Some may describe this advert as a salty, unprofessional attack on a rival company. However, Viola Black’s decision to go with this slogan has caused a real stir in the personal finance world. The company has done a great job in getting it’s name out there. When you're a young business entering the industry, having people talking and getting your name out there is a must and Viola Black have done a damn good job.

The real reason why I am writing about Viola Black isn’t because it made a bold campaign, it’s actually because of its phrasing behind this campaign. It’s decision to use the words ‘move over’. While most would think nothing of the phrase, I found the choice of words quite strange, I mean ‘ move over’, why on earth would Viola Black agree to make their marketing slogan ‘move over’. ‘Move Over’, isn’t far away from F*** Off”. If I was told by a stranger in public, to ‘move over’, I’d be pretty shocked as I think most people would, so how and why would Viola Black, the company backed by a huge corporation be okay with this being the defining feature of their gigantic campaign. Well funnily enough I think I have the answer, Viola Black have taken a page out of the internet trolls book and built this campaign on the basis that it will receive a humorous backlash. ‘Move over’ is a popular phrase used in memes and has entrenched itself in internet slang. I feel it’s appropriate to showcase an example of a ‘Move over’ meme simply to avoid any confusion. See below. 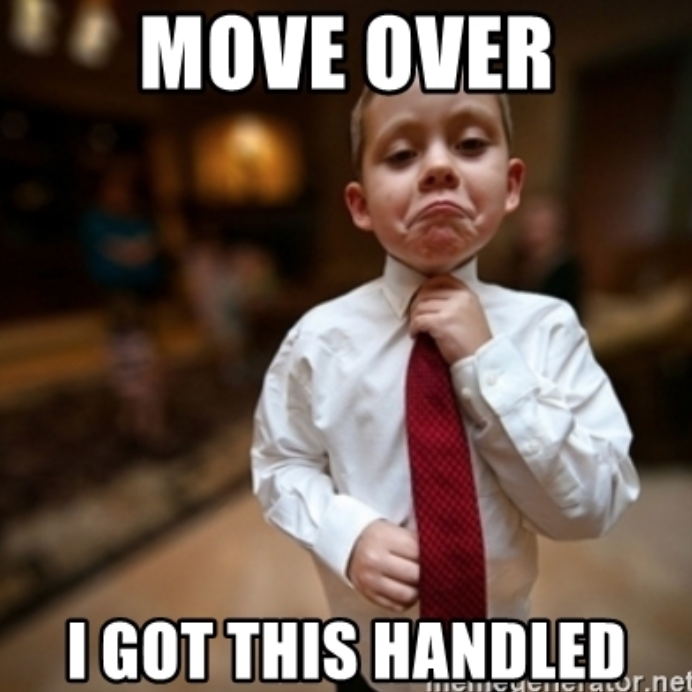 We live in a world dominated by internet beefs, trolls and memes and Viola Black wanted to put itself right in the middle of it. By creating a campaign underpinned in troll/meme culture, Viola Black expected a strong reaction with an end goal to become some sort of viral sensation.

Viola Black’s decision to call out Monzo falls right into the jurisdiction of internet beefs and their decision to do this follows the exact same marketing strategy as many young American rappers. As a publicity ploy a lot of young rappers have gone on social media to attack more successful rappers in an attempt to get a public response from the said ‘bigger’ rapper. Replace the word ‘rapper’ with ‘personal finance management applications’ and there we have it, the same marketing strategy. Viola Black name dropped Monzo in an attempt to get Monzo to respond thus making Viola Black known to all Monzo users. With no public response from Monzo it seems Viola Black failed to get any retaliation from poking the beast.

Viola Black isn’t the only company that has pinned itself to meme culture, Challenger Bank ‘Revolut’ has also immersed itself in this trend with its latest ad campaign. Revolut’s new campaign has been criticised for single shaming. Many headed to twitter to vent their anger at Revolut’s decision to publish an advert that exposed single people on Valentine’s day and belittled them with the sneery comment ‘You ok, hun?’. It doesn’t take a genius to figure out that Revolut did this very well knowing it was going face significant backlash, most likely following Oscar Wilde’s belief that ‘there is only one thing in life worse than being talked about, and that is not being talked about’. Revolut doing an outlandish and arguably offensive advert isn’t what interested me, what I found striking about this advert was Revolut’s decision to use meme slang. The phrase ‘You ok, hun?’ is a popular internet expression with sneery and sarcastic undertones which is used to belittle the person the question is aimed at. A plethora of memes use this phrase as their punchline, so far so, that popular high street brand Topshop even started selling ‘You ok, hun?’ t-shirts. From Revolut’s perspective the decision to go with this phrase can only be seen as a success based on the sheer amount of press mentions alone. It is nothing short of impressive that they received mentions from The Times, The Telegraph, The Guardian, The Independent as well as two from the BBC one of which shared a positive light on Revolut. In spite of what you may think about this unsavoury advert, from a marketing stance it has a been a huge success and has opened Revolut to a wider audience. They used the phrase ‘You ok, hun’ as bait and it didn’t take long for the press to get hooked. Revolut has internet culture to thank for this one. See their risky advert below. 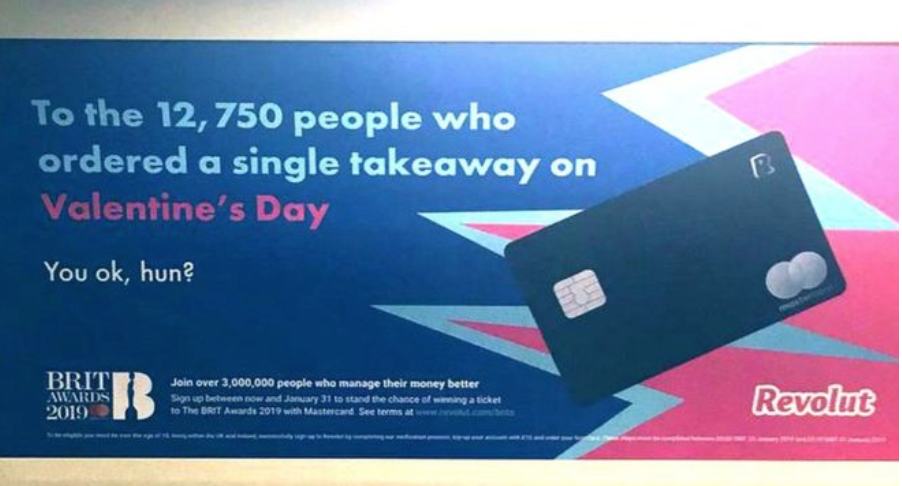 With Viola Black and Revolut using memeification in their adverts we can see a pattern start to emerge, this pattern is reinforced by the structure Of N26’s (another challenger bank) recent campaign. As seen on the next page, N26’s newest ad follows the same structure as a meme, using an image and then a short humorous explanation of it. While N26’s ad isn’t as outlandish as Viola Black’s and Revolut’s, it still follows the same pattern of memeification. I think it’s somewhat absurd that there were three personal finance applications running adverts on the tube in January 2019, all of which featured aspects of meme culture. Is there any specific reason why challenger banks and Personal finance apps are veering towards memeification? no one really knows, what we can take away from this is that Open Banking is becoming an increasingly competitive market and because of this we are seeing companies try new things to give themselves that competitive edge. 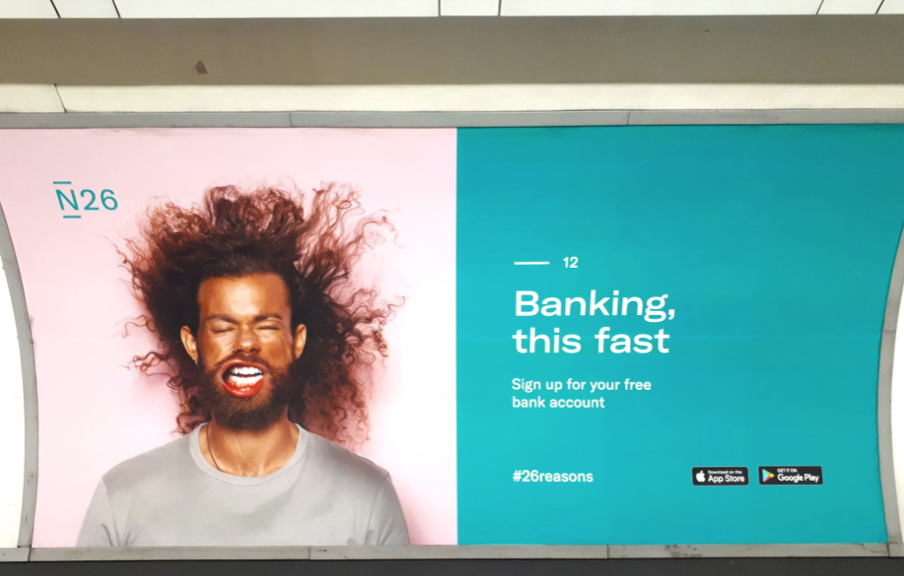